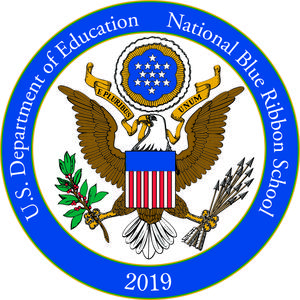 Hickam Elementary School awarded as a National Blue Ribbon School for Exemplary High Performing schools and is ranked in the top 15 percent of Hawaiʻi schools in achievement in English and math on 26 September, 2019 by the U.S. Department of Education.

HONOLULU – Lt. Col. Horace Meek Hickam elementary school have been named a 2019 National Blue Ribbon Schools by the US Department of Education. The program honors public and private elementary, middle and high schools based on academic performance and progress in closing achievement gaps among student subgroups.  The three Hawaiʻi schools were among 312 public school and 50 non-public school winners nationwide announced today by US Secretary of Education Betsy DeVos.

“The National Blue Ribbon Schools award reflects the long-term commitment of an entire school community to deliver on our promise to improve equity, excellence and innovation in our public schools,” said Superintendent Dr. Christina Kishimoto.  “It reflects the hard work of students, teachers, administrators and families, and we congratulate Hickam, Lāʻie and Waialua elementary schools on this very prestigious recognition.”

Schools are ranked based on one year of performance in math and reading.  The eligible top six schools that meet the criteria set by the National Blue Ribbon Schools are presented to a selection committee of local community members. The committee selects the top three schools to be considered for nomination of the award.

The U.S. Department of Education will formally recognize all the honored schools at an awards ceremony in Washington, D.C., on November 14 and 15.

Hickam Elementary has met the performance award criteria for Exemplary High Performing schools and is ranked in the top 15 percent of Hawaiʻi schools in achievement in English and math.  Hickam’s performance has outpaced other school performance averages statewide in English Language Arts (ELA, 18 percent higher), Math (18 percent higher) and Science (19 percent higher) in School Year 2018-19.  Hickam’s enrollment consists of 99 percent military-dependent students and is highly transient due to military personnel movements.  Understanding that one of the biggest challenges military children face is integration into new communities and schools, Hickam recently dedicated its Aloha Transition Center, the “front door” to the campus and a space that provides a feeling of belonging to the school ʻohana for any student new to the school.  The student-led welcome program allows new students to focus on academics, knowing they already have friends who can empathize with their transition and support them in times of uncertainty.  Hickam currently serves a student body of 566 students.